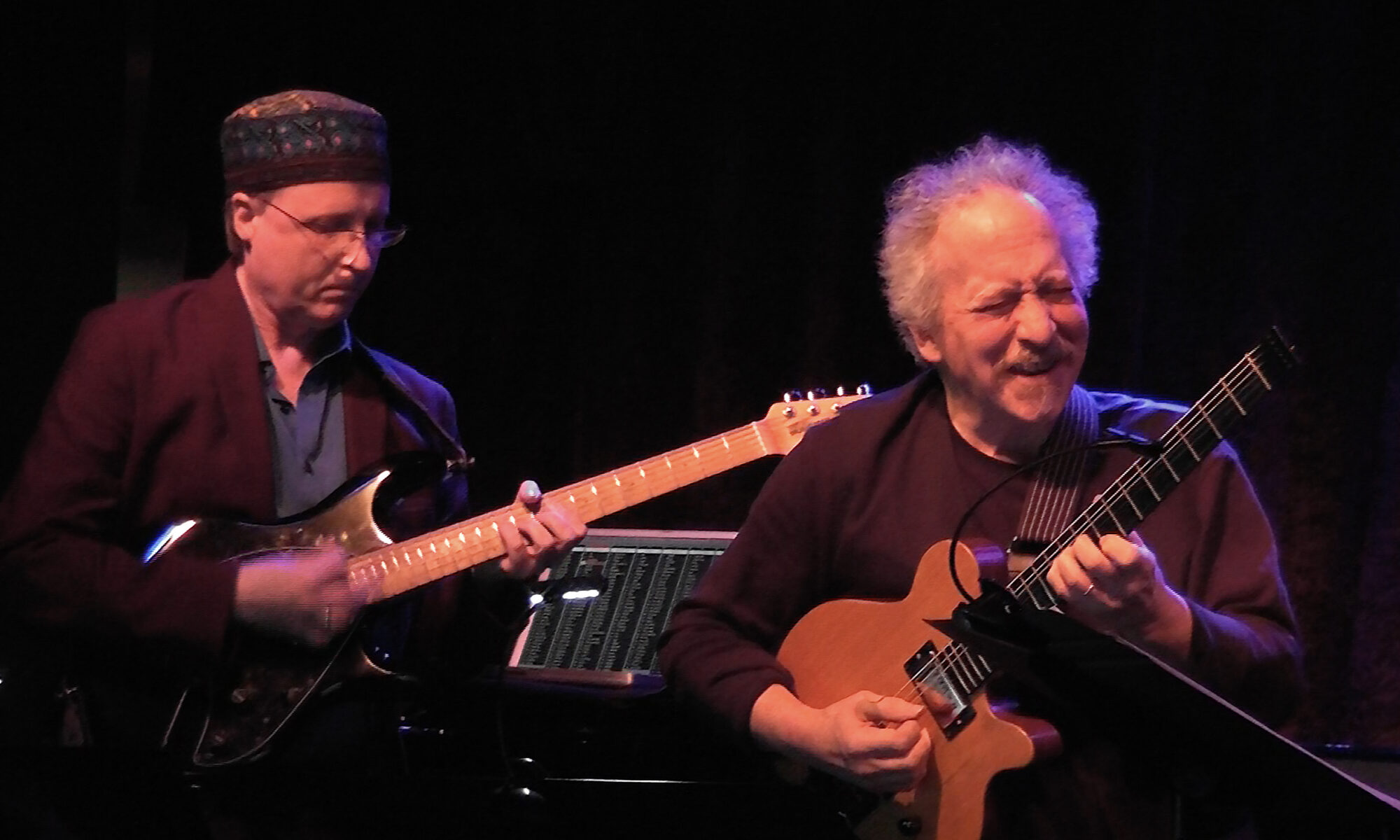 To read more or to listen to the compositions on this CD please visit our Heard Instinct CD Page.

In general Bruce is on the left side and Kenny is on the right side of the mix, but they are not panned all the way, so even knowing that, it’s a bit hard to hear who is who. Here are some tips while you listen.

NOTE: Times are approximate to within one or two seconds:

“Pete’s Mistake” by Kenny Wessel from the CD “Heard Instinct”

You can purchase “Pete’s Mistake” on the Apple Itunes website or at any online outlet that sells CDs such as amazon.com 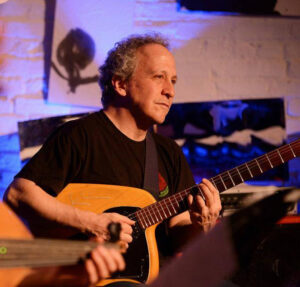 Kenny Wessel, a versatile, sensitive and soulful guitarist and composer, has performed in 28 countries. He toured with revolutionary jazz artist Ornette Coleman for over 12 years as a member of Prime Time, Ornette’s groundbreaking ensemble. Kenny can be heard on Coleman’s CD, Tone Dialing. Performing Ornette’s “Skies of America,” Wessel has appeared with Kurt Masur and the New York Philharmonic and London’s Philharmonia Orchestra. A vital and personal voice on the jazz guitar, he has also worked with Donald Fagen (featured guitar soloist on Fagen’s Morph the Cat), David Liebman, John Abercrombie, Karl Berger, Joe Lovano, Debbie Harry, Laurie Anderson, Gloria Lynne, Adam Rudolph and others from the jazz, pop and world music spectrum. 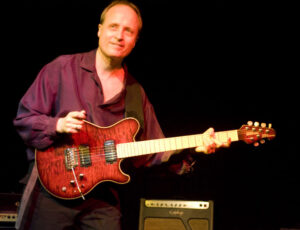 Throughout his impressive body of work over the past 20 years, Arnold has deftly pulled together a myriad of musical influences ranging from Messiaen, Schoenberg and Webern on the contemporary classical side to Bill Frisell, Pat Metheny and John McLaughlin on the modern jazz guitar side. Furthermore, he has laid out his ideas in clear, concise fashion in the 52 instructional books that he’s written on ear training, theory and technique (including his mammoth, 700-page “The Sonic Resource Guide”). His latest educational outreach endeavor is “Bruce Arnold’s Jazz Guitar Summit NYC,” a series of guitar instructional videos that he oversaw for TrueFire Video (www.truefire.com) which break down specific techniques for aspiring players. Such celebrated New York-based six-stringers as Jack Wilkins, Leni Stern, Sheryl Bailey, Peter Leitch, Mimi Fox, Brad Shepik, Peter McCann, Serbian-born classical guitarist Dusan Bogdanovic and other prominent players were recruited by Arnold for these enlightening instructional videos. As he explains, “This video series is an outgrowth of the New York University Summer Guitar Intensive that I headed up for six years. All of these people were coming in and doing clinics for the students in this program I established, and I just thought, ‘This is amazing! We need to document this.’ These are all great players with a lot to offer to aspiring guitarists who are looking to improve their playing significantly. It’s just a treasure trove of information for guitars of all levels.” 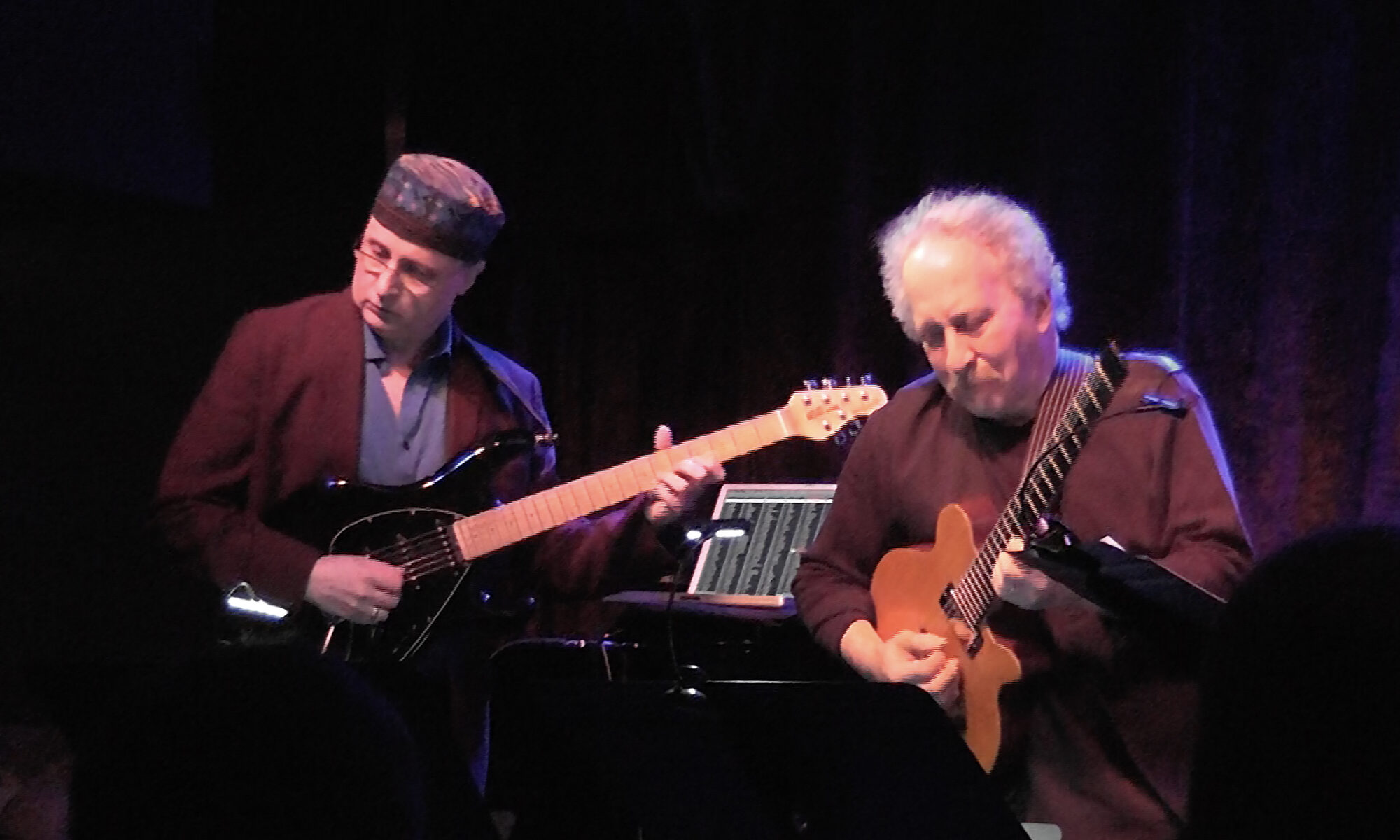 To read more or to listen to the compositions on this CD please visit our Heard Instinct CD Page.

In general Bruce is on the left side and Kenny is on the right side of the mix, but they are not panned all the way, so even knowing that, it’s a bit hard to hear who is who. Here are some tips while you listen.

NOTE: Times are approximate to within one or two seconds:

“Three and Fro” is based on a 1/2 and a minor 3rd. Bruce plays melody while Kenny plays bass notes for the head which repeats at 0:35. The they both solo together at 1:00 over what is basically a long form blues. Then they play the head out at 4:03, same arrangement as opening.

You can purchase “Three and Fro” on the Apple Itunes website or at any online outlet that sells CDs such as amazon.com

You can purchase “Pete’s Mistake” on the Apple Itunes website or at any online outlet that sells CDs such as amazon.com

Bruce starts out playing harmonics while Kenny comps; then Bruce plays the head at 0:30 and Kenny solos at 1:00. Bruce solos at 3:00, then at 4:45 the head is played by Bruce with a tag ending.

Guitarist Bruce Arnold’s “Heard Instinct” is a showcase for his formidable melodic compositional chops. It also recalls the wide open spaces of his native South Dakota. The head is a delicate reminiscence segueing into a solo admirably played with petal soft sensitivity by Kenny Wessel. Bruce Arnold takes the solo into flashier territory before bringing it back to its tender conclusion. “Heard Instinct” is a song with a simple melody, and a haunting emotional core.

You can purchase “Heard Instinct” on the Apple Itunes website or at any online outlet that sells CDs such as amazon.com

You can purchase “Unstrung” on the Apple Itunes website or at any online outlet that sells CDs such as amazon.com

Heard Instinct CD Notes for “Once” by Bruce Arnold

You can purchase “Once” on the Apple Itunes website or at any online outlet that sells CDs such as amazon.com

Kenny plays the melody free while Bruce comps. The bridge comes in at 0:25 to approximately 0:35, then the melody is restated. 1:08 starts Kenny’s solo. The soloist cues each chord during the solos. 1:48 Kenny plays parts of the melody then continues soloing. Bruce solos at 4:25, again free soloist cueing each chord change. At 6:19 Kenny comes back in with melody. At 6:58 they start trading and playing together. Each soloist plays the chords in order but changes the speed at which the chords change creating a random collage and hopefully not playing over the same chord at the same time.Thus the soloing gets more and more free until 8:15 when Kenny comes back to the melody to the end.

You can purchase “Sunset” on the Apple Itunes website or at any online outlet that sells CDs such as amazon.com

This composition is composed using the chord changes for “Like Someone in Love.” Kenny plays melody at the top, then at 0:52 he solos. At 2:30 Bruce solos. Kenny plays the head at 5:00 and at 5:43 tag end played by Kenny.

You can purchase “Somewhat Likely” on the Apple Itunes website or at any online outlet that sells CDs such as amazon.com

You can purchase “Dakota Gumbo” on the Apple Itunes website or at any online outlet that sells CDs such as amazon.com